OK. I’ve only had 3 hours of sleep but I’m back up and totally jazzed about finishing this blog post. Why does this never happen when I get 3 hours of sleep on a work night? But, yet again, I digress.  Where did I leave off?

A moment in the sun (of Diana’s presence)

Oh, yes! Lunch! But wait, there was this other little thing that happened before lunch. As a part of signing group D, I waited my turn to get Diana to personalize my brand new copy of MOBY! Happily, the line moved pretty quickly as attendees were limited to having their copies of MOBY personalized with just their name. Being the lovely gracious woman that she is, Diana signed my copy for me in the Acknowledgements section where my name appeared. I was thrilled to have another few moments to have her sign the book, thank me for my help, and have my picture taken.

My moment with Diana!

Still basking in the glow of my moment with DG, I headed up to grab some lunch. Some of us who have blogs and fan sites had deliberately maneuvered our way into the same signing group so that we could have lunch together and plot strategies for getting new subscribers for Starz. This is important: New subscribers will be one of several key drivers for the success of the Outlander TV series and determine whether it is renewed for subsequent seasons.

Entering the Armory food court, I found it to be a hub of activity. Apparently, in addition to our own event, there was also some kind of Filipino cultural celebration being held. Skirting the resultant crowds, I scoped out my options and settled on Pies! I figured a savory meat pie would be the closest meal I could come to one that Jamie and Claire likely will eat in MOBY. The Cheeseburger Meat Pie was delicious. (I really wanted the English Meat Pie, but there weren’t any ready when I ordered and besides, I was afraid that would brand me a Sassenach forever.)

After our strategy session wrapped up and lunch was devoured, we headed back down to the Fisher Pavilion for the continuation of the afternoon events.

First up on the roster of afternoon activities was a demonstration of Scottish dancing. Seattle’s Royal Scottish Dance Society delighted attendees with their performance of Scottish country dances in both soft and hard shoe. I was also delighted to hear several tunes that I recognized as staples in the Cape Breton, Nova Scotia musical repertoire. Cutest of all were the littlest costumed members of the group. I caught some lovely pictures and a few short videos to give you a taste.

After the dancing, I spent the next hour pleasantly conversing with many Outlanders I heretofore had only known through social media while valiantly ignoring the siren call of MOBY from the depths of my Random House tote bag. Next up was the hour for which we had all been waiting. It has to be something good if a sign like this shows up, right?

END_OF_DOCUMENT_TOKEN_TO_BE_REPLACED

So the day I have so eagerly anticipated has finally arrived. Thanks to a body conveniently still running on Eastern Daylight Time combined with an early Seattle sunrise, I was awake bright and early this Saturday morn. After completing my morning Social Media routine — the only morning exercise routine in which I am generally willing to engage, I headed down to the hotel restaurant for a quick breakfast. That essential task completed, it was time for my roomie and I to jump in a cab to head to the Seattle Center for our special day.

A funny thing happened in that brief ride. My heart began to beat just a bit faster and my anticipation kept building higher and higher. I had such expectations for this event, would the actual day live up to all the anticipation? Let me set your minds at ease and tell you: ‘Yes, it absolutely did!’ But, I digress. After a brief cab ride, we arrived at the Seattle Center and made the short walk to the Fisher Pavilion. I must confess I was a bit worried when I first spotted our destination. 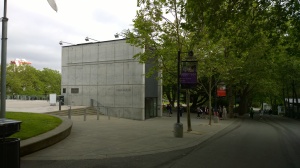 The event was billed as an intimate gathering, but this building seemed to promise a closeness I’m not quite sure I was willing to accept. Luckily, this turned out to be the elevator entrance for the Pavilion which was down a flight of stairs. Whew, first crisis averted. Upon descending the stairs, we were quickly checked in by the ultra efficient Random House staff and entered another world.

Once inside, we were transported into the world of Outlander. I quickly found my way through the maze of fans to claim my bag-o-swag — including the long-awaited copy of MOBY. (Which, to be honest, is currently sitting on the end of my bed in the hotel room right now, calling my name. The blog comes first, however!) Next, I headed into the room where the festivities would begin and Diana’s Keynote and Q&A would be held. To pass the time, I cracked open my copy of MOBY to take a peek at the Acknowledgements.

So why look at the Acknowledgements you may ask? Well, first, I didn’t trust myself to be able to STOP reading if I started reading the actual story; not even for Diana. Secondly, I played a very small part in helping to gather information and proofread the family tree that many of you will find in the end papers of the hardback copy of MOBY. In exchange for these efforts, Diana had graciously promised to include me and my nitpicking compatriots in the MOBY acknowledgements, and, sure enough, we were there! I have to tell you; It was very thrilling to see my name there in print.

Are we in Claire’s Surgery?

Nitpickers extraordinaire minus one!

My name in print!

END_OF_DOCUMENT_TOKEN_TO_BE_REPLACED

You know, before the Outlander TV series was even a twinkle in Ron Moore’s eye, Outlander was all about the books and Diana Gabaldon. Now don’t get me wrong, I’m as excited about the TV series as anyone and maybe more than many, but I first experienced Outlander through the magic of Diana’s pen, well keyboard really, and that is still the primary experience for me. Delightful as I find pictures of Sam, Matt’s #POTD and Terry’s costume classes, it still comes down to the magic of the words.

You can imagine how excited I was when Random House announced plans for an Outlander Retreat to celebrate the long-awaited release of MOBY — more properly known as Written in My Own Heart’s Blood. Luckily, when the appointed day and time arrived to purchase tickets — which sold out in 15 minutes — I was able to secure one, although not without some assistance from a Random House angel due to some technical glitches.

All spring I have waited for this weekend to arrive, contenting myself with Starz trailers , DG’s Daily Lines and tweets with Outlanders world-wide. Finally it is here! I woke up bright and early this morning and headed off on my Seattle Outlander Adventure. 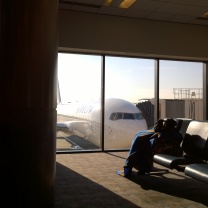 There is a plane at the gate. Great Start!

Once I boarded my plane, I just had to take a shoe photo for Terry. For those of you who may not know, Terry Moore often tweets fabulous pictures of her shoes when she travels. I did the same in LA in January and she seemed to get a kick out of it. Twice makes it a tradition, right?

During the 5 hour flight to Seattle, I amused myself with Twitter and reading my Kindle. Thank goodness for technology! Arriving at Sea-Tac, I made my way to baggage claim to wait for @LallybrochLaura with whom I was sharing a ride to downtown Seattle. As planned Laura landed very soon after me and we quickly found each other. If only finding our town car driver would have been so easy. But on the other hand, if it had, we would have missed out on a thrill.

Could the weekend have started any better?

As I was saying, Laura and I finding each other was smooth sailing, even though we had never before met in person.  The driver, not so much. However, during the course of wandering looking for our lost driver, we stumbled upon many other drivers also waiting for passengers. And it just so happened that Laura noticed one of them holding a sign saying ‘Gabaldon’. Immediately our eyes got verra big and no sooner had we processed the sight than we turned around and… just about ran smack into Diana herself. Not wanting to keep her, we contented ourselves with the briefest of introductions, handshakes and a ‘can’t wait to see you tomorrow’ remark. We also helpfully pointed her towards her driver and then continued the search for our own.

Luckily, a quick phone call resolved the missing driver situation and Laura and I were whisked downtown. Arriving at the hotel, I checked in and Laura stashed her bag in my room while we went in search of lunch.  One of the nicest things about my hotel’s location, is that it is right next to an elevator that whisks you from water level to Pike Market level very quickly without dealing with the hills for which Seattle should be famous. (San Francisco has nothing on Seattle.) We decided to have lunch at Lowell’s in Pike Market.  The food, conversation and view were all lovely.

The Mountain is Out!

After lunch, we walked back to the hotel and Laura headed off for her evening’s activities. The only thing left on mine is dinner with a friend.  Plan to call it an early night so as to be well rested for the main event tomorrow!