So as we roll into summer, we’re only 47 days away from the premiere episode of Outlander. (Unless you’re lucky enough to win one of the coveted invitations to the July 25 Gala premiere or July 30 Time Warner Cable preview. Anybody need a +1?) As existing Outlander fans though, we need to be prepared for the multitude of questions that will come our way as the rest of the world falls for Outlander.

One question I’ve had, and that I’ve heard others ask as well, is ‘what is the difference between the pronunciation of Gaelic and Gàidhlig?’

Well, what better source for a definitive answer than Outlander’s own Gàidhlig expert and tutor, Àdhamh Ó Broin? Here is what Àdhamh has to say on the subject:

What is the correct pronunciation of “Gaelic”? “The correct pronunciation is actually exactly as it looks. In the language itself, the word most commonly encountered is Gàidhlig /GAAHLeek/ (although in parts of Argyll, it is more like /GELLeek/ ‘e’ as in “get”) and this has meant that many people now say /Gahlick/ in Eng. But in truth this is more like a nickname for the language than a proper name. Scottish, Irish and Manx (the Isle of Man) are in fact all Gaelic -like “gay” & “lick” stuck together. This a language family, of Gaelic or Goidelic languages, not one particular language. The correct historical terms in English for the three sister tongues within this are exactly as above: Scottish, Irish and Manx. In fact, out of the six Celtic languages, only Scottish has ceased to be referred to by its historical national title, which is a matter of some regret, as it is the only language prior to the arrival of English ever to have been spoken throughout the country and its culture gave us most everything -from kilts, to pipes, to black pudding- we now associate with Scottishness. Another point to address would be the myth that has been floating about that Irish is /GAELik/ & Scottish is /GAHLik/ but if this were true, then the Scots who speak the language would be referred to as Gahls rather than Gaels which we know is not the case.

So which one to use? In Outlander, we have stuck with /GAHLik/ because this is the preferred term of the majority of Scottish speakers. There is no point in confusing matters for the sake of it. But were you to ask me my preferred pronunciation? That would be just as it looks and how it is pronounced in Nova Scotia to this day, /GAELik/!”

So there we have it. Originally there was probably no difference in the pronunciation of the two terms but for most of today’s Scots, and in Outlander, /GAHLik/ is the preferred pronunciation.

So as an added bonus, here is a picture that Àdhamh posted on his Facebook page this weekend. 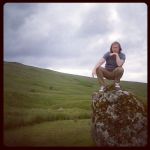 This stone was a boundary marker between Gleann Dà Ruadhail (glen of two red streams) and Srath Lachainn (Lachlan’s valley) parishes in my home district of Cowal, Argyll…
The “cailleach” associated with this stone was believed to be able to change shape to become a cow and return to human form.
An excavation has just been completed on the other side of the modern road that now intersects the area and they found an old inn where the drovers would drink their fill and sleep over for the night.
The glen is almost devoid of human activity now, save for the whoosh of the odd passing car moving between the two parishes…

6 thoughts on “What’s in a Name? Gaelic vs Gàidhlig in the Outlander World”