Woke up early this morning and had a brief Skype with Mom as she was up way too late. I captured a beautiful view of the light dawning over the loch next to the house. I eventually wandered downstairs to make myself some tea and eat breakfast. It’s so wonderful to be staying somewhere with a kitchen. Thanks Susan! 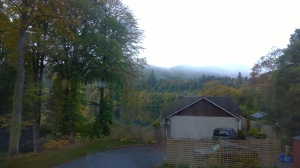 Before too long, Candida and I were ready to hit the road. On today’s agenda was Culloden Battlefield and Clava Cairns. We also had plans to meet up with Lisa, one of the Inverness Outlanders I wasn’t able to meet last week. On the A9 north, we drove through periods of sun, clouds and mist—you know, typical Scottish weather whiplash. By the time we reached Culloden though, the weather seemed to have settled into a period of sun. It was however the coldest day of the trip so far.

At Culloden, we paid our parking and admission fees and headed into the exhibition area of the Visitors’ Centre. The displays of artifacts and explanations of events were very good. I was also glad to have the chance to practice my Gàidhlig comprehension a bit more. (I even managed to try some pronunciations under my breath.) The most moving of the exhibits by far though was the Battlefield Experience.

The Battlefield Experience is a 360° audio visual experience that puts you in the middle of the Battle of Culloden. The sights and sounds were so realistic that, by the end, I had tears running down my cheeks. It was all too easy to imagine the fear, pain, and heartbreak that ensued on that moor on that day. It’s very hard to believe that the whole battle lasted not more than an hour or so.

Another interesting part of the exhibition was a live demonstration of how the Jacobite Highlanders were armed for the battle. Only the wealthier lairds and tacksman would have been armed with firearms. Regular clansmen would likely have only been armed with targes, dirks, and baskethilt swords. Once the demonstration was finished, Candida and I picked up our audio guides and headed out to the battlefield.

The Culloden battlefield really was the windswept moor I’ve always seen described. Even on a sunny day (or at least it was sunny when we started), there was a hint of the desperation of the battle that occurred almost 300 years ago. I wandered from point to point of the tour, listening to details of the Jacobite and Government forces formations, trying desperately not to imagine the carnage of the battle too clearly. Such a tragic waste of life and the beginning of a systematic destruction of an entire culture and way of life.

Looking out over the moor.

A view across the moor towards the cairn. 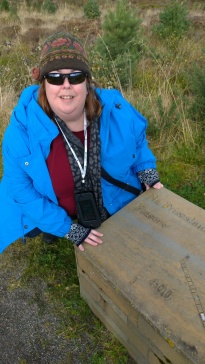 Me with the marker for the Clan Fraser in the Jacobite line. 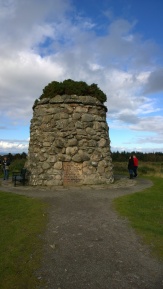 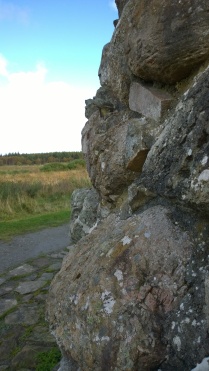 Closeup of the cairn. 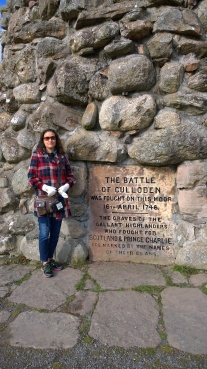 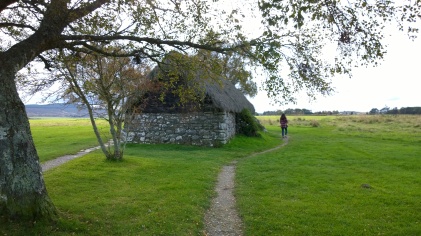 Cottage on the battlefield.

Just as Candida and I were finishing up our battlefield tour, I got a text from Lisa that she had arrived. We spent the next hour chatting away as Outlanders do while Candida and I had a bite of lunch in the Visitors’ Centre cafe. My brie and onion relish tart was delish and I also had an excellent slice of millionaire shortbread, confident that the walk around the battlefield had to have put a dent in the calories. Lisa also offered to go with us to our second destination of the day—Clava Cairns.

Clava Cairns is widely accepted as one of the Scottish stone circles that inspired Outlander’s Craig Na Dun. It is just a short drive from Culloden and is a beautiful and peaceful place—or at least it probably is when there aren’t two mini-coaches full of tourists. Even so, we were able to wander among the cairns and stones and I made yet another valiant attempt to make the stones work for me. I really must plan my next trip to Scotland closer to a fire feast. 😉

View of the site.

Inside the northwest passage grave. 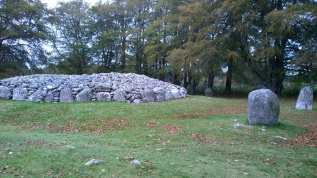 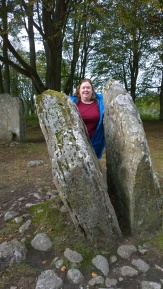 Don’t let the stones get in the way of the road.

Closeup of one of the cairns.

After the visit to the Cairns, we dropped off Lisa and filled the car up again. (At this point, I don’t even look at the numbers on the pump any more.) We made the 90 minute drive back home to Pitlochry in time to spend a few minutes catching up on social media and then walked into the town for dinner.

After surveying our options, Candida and I settings on the Strathgarry restaurant. We split a starter of tomato and mozzarella salad (interestingly served with salsa) and then I had a main course of Scottish beef rib-eye. My excellently prepared steak was accompanied by chips, grilled tomato, and a simply dressed salad of rocket. After cleaning my plate of everything except the chips, we walked back home, content with our meal and our day.