Woke up to vastly improved weather conditions in Skye on Tuesday. But if I have learned anything in my time in Scotland, it is that you can’t judge the next 5 minute’s weather by the last five minute’s weather! A side effect of the clearer weather though was chillier temperatures and the morning air had a decided nip to it.  After a breakfast of scrambled eggs and tea, I hopped in the car to begin the day’s adventure. The plan was pretty ambitious: drive round the Trotternish peninsula, find the Fairy Glen and the Fairy pools, and then head back over to the mainland and arrive in Inverness in time for dinner and drinks with some of the Inverness Outlanders group.

With no time for dilly dallying, I settled the tariff at the B&B and set out. (Don’t you love the way I’m starting to talk like a native? 😉 I’m telling you, another week and no one will know I’m from Georgia!) I made it at least a few hundred yards before stopping to take some photos. With all the rain of the last few days, there were waterfalls absolutely everywhere. I snapped a few and then also got a photo of the rock formation known as the Old Man of Storr in the distance. I also stopped to take some photos of Kilt Rock, which reminded me very much of the Cliffs of Moher in Ireland with the addition of a lovely waterfall into the sea.

The mountains are everywhere in Skye.

Why are ewe up this early? 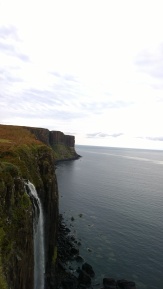 Here’s kind of a panorama video I took.

After that, it was time to brave the single track road up to the Quiraing. (For those of you not familiar with single track roads, see previous day’s post.) I will say this particular single track road was a bit more intimidating than yesterday’s. Fairly steep and several right hairpin turns. Luckily I was still pretty early and there wasn’t a lot of traffic. The views at the top were absolutely stunning and well worth the trip. Outlander fans will recognize these views as being used in some of the trailers for Outlander. You’ll also have to humor me as I completed another bucket list item for the trip and recorded myself singing The Skye Boat Song while actually IN Skye. Against my better judgement, I’ve been convinced to post the link here. Better listen quick before I change my mind. Just be kind and remember that Raya Yarbrough I am not. 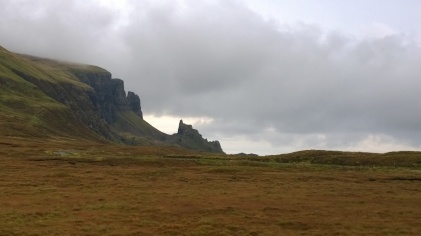 Making my way back down from the heights of the Quirang, I continued along my counter-clockwise circuit of the Trotternish peninsula. I was advised by Susan and Andy that going counterclockwise would lessen my chances of running into motor coaches on the single track roads. Oh, did I neglect to mention that most of the circuit was single track? Didn’t have any problems though with motor coaches; only a small delay due to re-tarring of the road. After the 10 minute roadwork delay, I made my way around to the Museum of Island Life that I had been advised not to miss. For the exchange of a small entrance fee, you get to see period buildings and a large selection of photographs and other items of yesteryear. I was even amazed to see a piece about weaving that has been maintained in Cape Breton but lost here at its origin.

Ever so sorry for the delay, mum.

After my quick trip through the museum, I made my way through Uig and started to follow Susan and Andy’s directions for finding the Fairy Glen. True to form, the directions were spot on and I was soon amongst formations that I could very easily believe are home to those most humans can’t see. After that, it was time for some lunch, so I stopped in Sligachan to chow down on some delectable Cullen Skink. Cullen Skink is a cream based seafood chowder made with smoked fish. It was delicious and with a pot of tea, more than hit the spot.

Hunger assuaged, I hit the road once more, this time in search of the Fairy Pools. I believe this is also a location used in Outlander as the Liar’s Spring. Unfortunately, I was running short on time and didn’t have time to actually hike down to the actual pools. I had to content myself from taking pictures from the mortal plane.

Notice the ant like figures. Those are people! That’s how far away it was.

This is as close to the Fair Pools as I got.

My visits with the Faery complete, I hightailed my way towards Inverness. Unfortunately, this meant that I had to leave Skye. I really, really didn’t want to leave. It is one of the most beautiful and magical places I have ever been. I can tell you now that I will be back, but until then, it really is the kind of place that never leaves you.

Unfortunately, the closer I got to Inverness, the worse the weather became. By the time I arrived at my B&B, it was actually raining pretty hard. The proprietress of the B&B was a kind soul and drove me downtown to the Palace Hotel (where I was meeting the Inverness Outlanders) so that I wouldn’t have to drive and try to find a place to park. I spent the next several hours having a grand chat with Sinead, Julie and Angela. Isn’t it amazing how we Outlanders never run out of things to talk about? Had a lovely dinner of fried fish, garden peas and salad before Sinead and I crossed the river to stop into a pub for a soft drink and some trad music. Reluctantly calling an end to the evening, Sinead dropped me back at the B&B and I’m pretty sure I was asleep before my head hit the pillow.

Angela, Sinead, Me and Julie

Inverness Castle in the rain.

Me in the rain!

This morning, I got up bright and early to have breakfast and make my way back to Glasgow for a special rendezvous. There really wasn’t any time to stop for photos on the three-hour drive from Inverness to Glasgow, but I did go through some beautiful country on my way down the A9, including Cairngorms National Park. I also had a great view of Stirling Castle by the roadside, looking majestic on its hill. And I did, barely, manage to refrain from taking the Cumbernauld exit, just so I could drive by the Outlander studio lot. All of the restraint was well worth it as I made it back to Glasgow in plenty of time to hop a train into town. (I’ve been reliably informed that it’s called into Town even if you only go one stop. To call it Downtown hopelessly marks me as an American!) Once there, I spent a fabulous hour having tea and conversation with the incomparable Richard Rankin. It truly was a pleasure as he is every bit as nice and charming in person as he is online. We flagged down a passing stranger on Buchanan St. to help us immortalize the moment. Thanks again, lad. It was a blast!

So there you have it. We’re all caught up. Amazing how far behind you can get when you’re without Internet for a night! Stay tuned because tomorrow Candida arrives and there is no telling what the two of us might get up to next!