Woke up bright and early this morning. Well, it was early anyway. Not so bright at 6:30 am. The sun did eventually come up and out though and it was proving to be a lovely day when  I collected Candida from the airport. Our first stop was back to Susan’s to drop off Candida’s bags and let her catch up on 8 hours of social media, then we went out to grab breakfast. Breakfast over and done, we headed for our first location of the day – Doune Castle.

On the way to Doune, it was time to put another paycheck’s worth of gas in the car. 😉 And if we stopped to get gas at the Cumbernauld exit off the motorway, that was just entirely coincidence.  Arriving after the hour drive, we paid our entrance fee in the gift shop and paused to make note of the copy of Cross Stitch for sale. Although, I have to say that the Monty Python memorabilia is totally outnumbering the Outlander items.  Outlander fans need to make sure that changes pronto.  Inside, Miss Candida at once sprinted into any hidey hole or staircase she could find. I followed at a more leisurely pace, punching in numbers on my handy audio tour.

Since Outlander has finished filming, Historic Scotland has erected scaffolding in the courtyard to do preservation work. There were also some workers inspecting the castle well. I think at least one of them was a candidate for Candida’s HotScot list but not sure if she got a picture. Eventually, we wrapped up at Doune and, since it was still mid afternoon, decided to head over to Blackness Castle since it wasn’t that far away.

Candida in the cellars.

Courtyard. Imagine that Sam and Cait were right there! 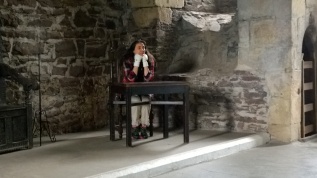 View along the ramparts.

View from the Castle.

It was raining by the time Candida and I made the half hour drive from Doune to Blackness Castle. Here we ran into a bit of a problem. Despite there being no signs of a closure, Blackness Castle didn’t appear to be open to the public today. Candida and I walked around the outside of the castle checking all of the windows for Jamie, but we couldn’t find him anywhere! We were thinking the poor lad would probably appreciate some tea and scones after being stuck in that window for several weeks. Having no luck, I finally sent Candida inside on a reconnaissance mission. She came back out so quickly I was afraid she’d seen Black Jack Randall himself, but luckily it was just work crews. We did eventually (and by we, I mean Candida) find out that Blackness will be back open on Saturday, so I foresee a return trip in our future.

No Jamie in this window!

View over the Loch.

After striking out at Blackness, we decided to pop over to Linlithgow Palace, the birthplace of Mary, Queen of Scots. Unfortunately again, we were 10 minutes too late to tour the inside, but we spent some lovely time walking around outside in the rain. Linlithgow was burned by the Hanoverians and is now just a shell, so we didn’t feel too bad about not seeing the inside. Heading back to Glasgow, we unfortunately got caught in the 5 o’clock rush hour in Glasgow. Let me tell you, Atlanta has nothing on Glasgow! Finally arriving back in Shawlands, Candida and I had a lovely dinner at the The Waverly Tea Room around he corner from Susan’s. I had mushroom and parmesan risotto and Candida had fish ‘n chips.

So, all in all, we had quite the full day. Now that we have sat still for a bit, I think that travel has caught up with Candida and the early morning has caught up with me. Up next is the Mini Outlander Gathering at Deb Firth’s Hillcrest House in Wigtown.