Candida and I were just a little bummed this morning to be packing up to leave Pitlochry. It’s been such a wonderful home base for our explorations. Thanks again, Susan! I was also just a bit worried looking at all my packages and parcels about getting all the stuff I’ve bought into my suitcases for the trip home. But, like Scarlett, I’ll think about that tomorrow.

Our last morning’s view of the loch.

All the comforts of home.

Lovely view from the Master Bedroom

We did finally get our stuff loaded though and headed north for the final time. This time our destination was the Highland Folk Museum at Newtonmore.  Arriving, we checked in at Reception. There is no charge for the Highland Folk Museum, just donations requested to help maintain it, and the friendly person at reception was happy to orient us to the mile-long site. Weather being extremely Scottish at the moment, Candida and I chose to head straight for the 1700’s replica township on site. (Only a 5 minute walk we were promised. I’ve been to Scotland before, so I knew better. Apparently, whoever sets these times walks much fast than I do!)

On our way to the path through the woods back in time, we stopped to check out the Tailor’s shop and the Joiner’s shop (appropriately Fraser & Co.) The path then meandered through peaceful forest until we emerged…straight into a 1700’s Highland Village. Viewers of Outlander Episode 105 – Rent will immediately recognize several buildings. All that is missing is Jamie twirling his dirk.

Over the river and through the woods… 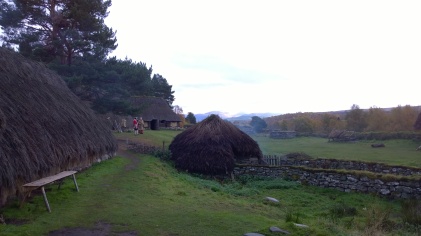 We were given a quick orientation to the village by costumed interpreter Elaine. We also caught a glimpse of a redcoat, but we did our best to keep ourselves in line. We wandered from building to building imaging ourselves living in such surroundings. I guess one does eventually stop noticing if your hair smells like peat smoke. We even discovered how you disguise the modern toilet in a 18th century village.

How to hide the potty!

Soon enough though, we got down to the serious business of figuring out exactly which buildings and angles were used in Episode 105. The costumed interpretive staff at the museum were very helpful. (You’ll see just how helpful in a minute!) 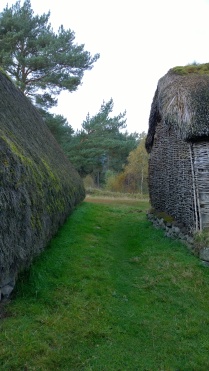 I think Claire and Angus walked through here. 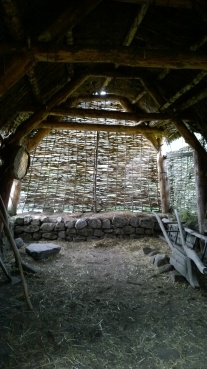 Where they were drinking before contributing to the bucket. 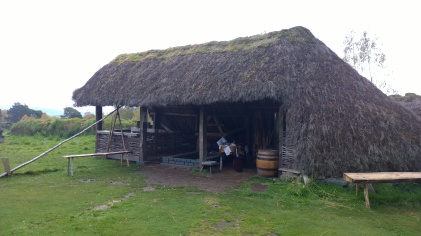 And where’s that nice Lt. Foster?

Then Candida really got into it and reinterpreted the scene where Claire tries to find ways to deal with her boredom. 😉

At this point, I think the acting bug bit Candida a bit too deeply. Behold a previously unknown Casting Video for the role of Claire Randall in Outlander!

Deciding at this point that discretion was definitely the better part of valor, we thought it might be time to leave the Folk Museum as several people might have been a bit alarmed at the screaming. I’m also pretty sure that Mike, the friendly Redcoat, will be dining out for some time to come on the story of the two crazy American Outlander fans. We, on the other hand, dined in splendor at The Wild Flour tea room in Newtonmore. I can highly recommend it as our meals were delicious.

Our Scottish Highlands visit over, we pointed the car south and headed back to Glasgow. Unfortunately, we ran into some nightmarish traffic on the A9 caused by roadworks near Bankfoot. After 20 minute or so of stop and go, we finally made it through and onto the motorway at Perth. Arriving in downtown Glasgow, we parked the car and headed out on foot in search of some dinner. We ended up at Waxy O’Connor’s and I feasted a final time on mussels. I didn’t realize when I ordered that a crock of mussels was literally a CROCK of mussels. They were scrumptious and I ate every one.

I can’t resist a pun!

I wish restaurants at home were this comfortable!

A huge crock of mussels.

I’m trying not to cry as I realize that tomorrow is my last day in Scotland. But, on tap we have a couple of more Outlander filming sites in the day and then a final evening at An Gealbhan with Àdhamh and Gillebride.