Sorry for the delay in today’s post but didn’t get in from Inverness until very late last night and after concentrating on driving very dark roads for 50 miles driving on the left, I was beat! Woke up extra early this morning to get it done though. Sitting here writing and listening to the rain patter on the roof and trying not to think about having to pack back up and head to Glasgow and then leave for home on Saturday.

Yesterday was beautiful though. At several points there weren’t even any clouds in the sky, so we had a beautiful drive down to the village of Falkland. We ended up doing some shuffling of our plans for the day as we realized that Aberdour Castle was going to be closed on Thursday and Friday, so we decided to do that today and hold off on Newtonmore until Thursday. We made the hour or so drive south to Falkland in good time, even lucking into a parking place right in town. Judging from the signs around town, parking is really restricted until the end of September but in October nobody cares!

My Outlander friends will recognize Falkland as the filming location used for 1940’s Inverness. Of course Candida and I did just a tiny bit of squeeing as we saw the house used for Mrs. Baird’s and the memorial in the street where ghost Jamie stands. We walked all around taking pictures, only occasionally remembering that we were mostly standing in a public street. Luckily traffic was a minimum. We also had a great time shopping in Earth Fayre, which was the shop front used for the scene where Claire looks at the blue vases.  We didn’t find any blue vases there, but I did pick up a bag full of great stuff for people back home and the owner even gave Candida and I a little free key-chain shaped like a sporran. She also told us a bit about how interesting it was to have her shop front turned into a film set.

After the shopping, we weren’t quite ready to leave, so we popped into Mrs. Baird’s, I mean The Covenanter Hotel, for a spot of tea. Well, I had tea and Candida watched me, as well as investigating into nooks and crannies—aren’t you shocked. 😉 We realized shortly though that we needed to hit the road if we were going to see everything we wanted to see. 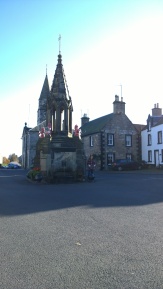 Candida, I think it’s a little cold to eat outside. 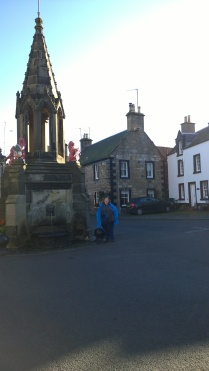 Too bright for Ghost Jamie, I think.

But I don’t see any blue vases!

The Covenanter Hotel aka Mrs. Baird’s

Next up was Aberdour Castle which we believe has been used a filming location for some Abbey scenes—of course we won’t know for sure until MAY! (Gah. I hate waiting.) I asked when we bought our tickets and was told that filming was done in the Old Kitchen and the Long Gallery. Aberdour is a fascinating building. It’s one of the oldest stone built castles in Scotland and one of the first with actual corridors. It was built in the 12th century originally as a Hall House but expanded and improved several times over the centuries. It also has a fabulous garden. Candida and I wandered through both the ruin section and the more intact section. We saw a fabulous painted ceiling. We also endlessly speculated what scenes the Outlander crew might have filmed. My bet for the filming in the Old Kitchen is for when Jamie goes out the window for a walk at the abbey. You’ll see Candida demonstrating in the pictures how this might have been done. 😉 For the Long Gallery filming, we’re really not sure. They might have used the entire room or just a portion.

Before leaving Aberdour, Candida dashed through the gardens and over to the parish church to snap a few more photos. She moves much quicker than I do and we were on a time schedule to get up to Inverness to meet the Inverness Outlanders.

Believe it or not, this chunk of wall didn’t fall until the 1840’s.

Remains of the ‘new’ kitchen. 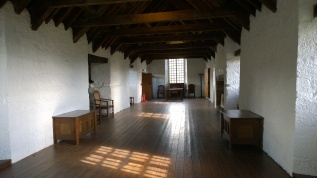 Churchyard at the parish church. 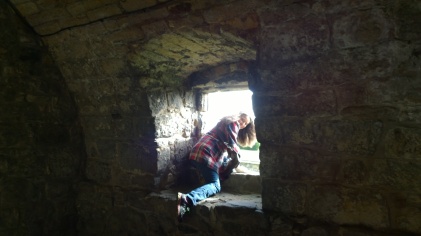 See! I think it would work.

Candida and I settled in for the three-hour drive to Inverness, with only a stop for lunch near Blair Castle. All my UK friends are astounded by how far we are driving, but to someone who regularly vacations in Cape Breton, driving a hundred miles on vacation is nothing. I can’t wait to tally up the miles I’ve put on the rental car in the last 2 weeks. I know it’s probably over a thousand miles. We arrived in Inverness in plenty of time for our meet-up but after all the shops had closed for the day. (My credit card probably sighed in relief.) Inverness was a busy place this week as the National Mòd is in town. The Mòd is a week-long celebration of all things Gàidhlig. It was quite the experience to hear more Gàidhlig than English being spoken as I walked beside the River Ness.

Beside the River Ness.

Finally it was time for our meet-up with the Inverness Outlanders, it was a thrill for us to have this chance to get together with Sinead, Joanie, and Lisa and we spent the next several hours chatting away as we always do. So nice to get the chance to do it in person and without 140 character limits! Sinead had even brought us goody bags from LearnGaelic. I can’t wait to go through and explore mine a bit more. I practically LIVE on LearnGaelic.net when I’m doing Outlander episode translations.

With our LearnGaelic goody bags!

All to soon though, it was time to say goodbye and head back south for our last night in Pitlochry. It was at this point I realized just how dark the A9 is at night. Luckily there was very little traffic and Candida and I made it back safe and sound.

Up next, a visit to the Newtonmore Highland Folk Museum and possibly a drive through Glencoe, if time permits, and then a return to Glasgow for some last-minute fun.