Well, hello again! You may have noticed but I took a day off. Kind of used Thursday as a bit of a rest day before gearing up for the last 10 days of the trip. I just drove up to Pitlochry for lunch with my friend Susan. She had just come off a long tour and was getting ready to head out again, but there was no way I was going to miss some time to chat and catch up, even if she is much in demand as a blue-badge tour guide for Eyes on Scotland and Outlander Tours!

After that, it was back to Glasgow for dinner with Maggie (and there might have been a glass or two of wine involved). Then it was just one more sleep until Ginger and Summer arrive and the mad rush of Outlander touring begins.

Friday morning, I packed up my stuff in preparation for our relocation north, and then it was FINALLY time to head to the airport. It was then that I discovered that a flight from Dublin is not considered an international flight. (I wonder how the Irish feel about that!) I quickly relocated from international arrivals to the Starbucks across from domestic arrivals. Seeing that no green tea was available, I bought some water and settled in to wait.

Remembering where I parked. 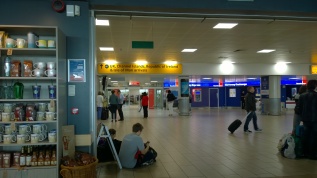 Once they arrived, we hopped in the car to head back into Glasgow for the night. However, it is bank holiday weekend in the UK and I have to say that the traffic on holiday weekend Friday in Glasgow has much in common with Atlanta. Eventually, thought, we passed the stalled car and things cleared up. At the hotel, the girls took a quick shower (OK. Summer insists hers was sexier than that, not that G and I were watching) and then it was time for dinner.

Based on my experience last time in Glasgow, I had booked us a table at Mother India in the West End. As last time, the food was fantastic. We started with vegetable pakora and then Ginger had a paneer dish, Summer had Chicken Tikka and I had lamb with leeks. (Yes, Mom. The lambs are still cute, but someone told me they are as large as their mothers by the time they are food.)

Ginger and I in the taxi

Dinner complete, we headed just down the street to our final event for the day. And when I say final, I mean I knew we would be there until tomorrow. An Gealbhan never ends early. As we approached the Argyll hotel, a familiar figure came into view. Many hugs and greetings with exchanged with Àdhamh Ó Broin, our host for the evening. He explained that things might be a bit more chaotic than usual as the Sutherlands Bar was without a bartender for the evening! Shock…horror….a Gaelic evening without whisky would be a tragedy. Luckily, Àdhamh is multi-talented and was able to man the bar until help arrived.

As a special treat, Àdhamh had arranged for a couple of special guests for the evening. So after kicking off with a song of his own, he introduced the lovely and talented Tara Rankin who favored us with some Gaelic songs a capella, as well as some Cape Breton tunes played on the piano. I’ve been friends with Tara (and the rest of her family) for many years and I took the opportunity to deliver a hug from her Mom as requested. Later in the evening, we were also treated to a talk on Scottish weaponry by a friend of Àdhamh’s, Allan Sutherland. I have some longer videos that I will edit and post when I get back home.

I spy a Highlander among us!

We rounded out the night with some fabulous Gaelic stories. And no…I don’t think any of the Cape Breton ones had a happy ending. I think Tara was amused by how my face lit up every time I recognized a Gaelic word. It was twice as amusing to hear Tara and Àdhamh translate for each other. I’m pretty sure she picked up some new words.

Eventually though, it was time to call the night to an end. Our new friend Asifa gave us a lift back to the hotel so that we didn’t have to find a taxi in the West End after midnight and it was greatly appreciated. Back at the hotel, we all collapsed into bed to refresh ourselves for the next day’s adventure.