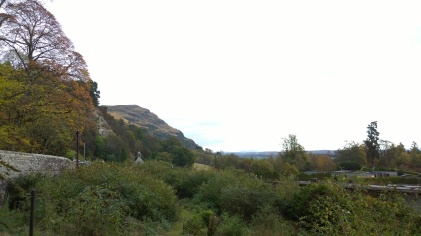 Next up, we headed over to Culross. Culross is the village used by the Outlander team for the fictional Crainesmuir as well as some of the outdoor garden scenes at Castle Leoch. The Palace itself was closed but we were able to explore the gardens to our heart’s content. We then ventured up cobblestone streets to the house that was used for Geillis and Arthur Duncan’s house. It has scaffolding because they are still in the process of returning the house to its pre-filming color.

Explaining the change of house colors for Outlander. 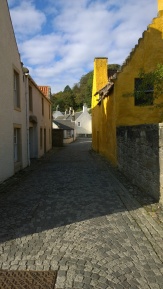 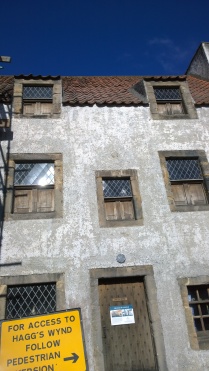 After Culross, we headed over to the West Kirk, better known to Outlander fans as the Black Kirk. We tried not to caper about too much out of respect for the holy place and I did manage to keep Candida from eating anything. I tried replicating Cait’s gorgeous photo in front of the arched window but my bright blue coat just didn’t produce the same effect as a full length wool cloak. 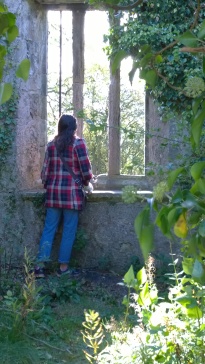 Just doesn’t work with the blue jacket. Where can I get a full length wool cape?

No, Candida! Don’t eat that. Claire’s not here to save you.

One of the highlights of our day  was our visit to Dunmore Park—the site of the filming for the WWII hospital scenes. This location would have been fascinating even without the Outlander tie-in. It’s the ruins of an early 19th century mansion that had the roof removed in the 1950’s and allowed to crumble. We spent more than an hour just rambling through the old stables and mansion, trying to keep Candida in check in her seeking out nooks and crannies.

Remains of plaster on the walls.

A little emergency artery clamping anyone? 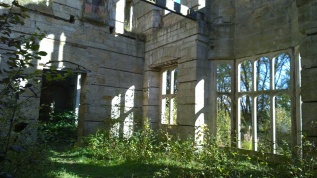 This archway should look familiar to Outlanders.

We figured we had time to hit one more location before giving in to the cries of our stomachs for lunch and with just a short drive, we found ourselves at the fictional home of Jamie Fraser himself, in real life Midhope Castle on the Hopetoun estate. This was after passing all the local hunters out with their hunting dogs and braces of pheasants. Candida and I have decided that pheasants must not be the brightest of birds judging by the numbers we have seen dead on the roads this week.

The Fraser crest has been removed. 😦 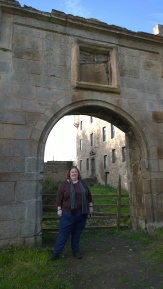 Since we were already on the Hopetoun estate, we decided to stop in at the tea room at the Hopetoun estate garden center for lunch. I’m glad we did. I had an excellent roasted veggie tart and salad along with a pot of tea and a scone. I think Candida continues to be amazed at the amount of tea I can put away. I also took the chance to do a bit of shopping in the gift shoppe. Should be some happy people back stateside come Christmas time. I couldn’t help but wish we had been there for the very appropriately named discount day! 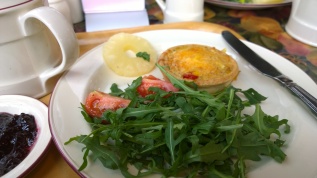 Our tummies satisfied, we hit the road once more. This time the destination was Bo’ness station. Bo’ness was the location used to film the farewell scene between Claire and Frank in the show. Try as I might, I couldn’t find Frank anywhere to offer my sympathy. We did find a pile of old luggage though. Maybe that is what happened to Claire’s suitcase. 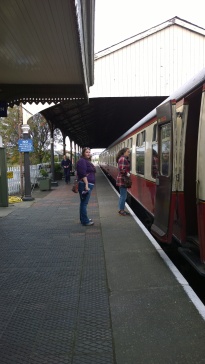 Frank? Where are you? 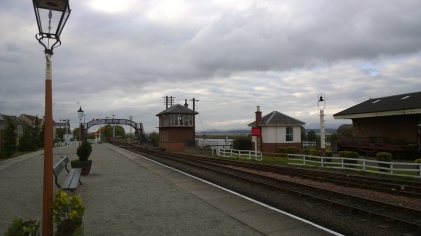 With the day fast fading, we figured we had time for one more location. First though, a quick detour for a photo op. Do you think the Outlander production would hire me as a technology consultant? Alas, I forgot to bring a resume with me. Maybe I could just give Terry as a reference. 😉 Detour finished, we spent the last of the daylight exploring Cumbernauld Glen. We know they spent several days and nights filming here and we had a blast wandering the paths trying to convince ourselves we recognized trees and rocks from the series. I’m not sure I have a whole lot of faith in us though. 😉

Anyone here need a technology consultant?

I’m sure we can find the right spot!

Daylight having faded, we declared our day at an end and dropped S. in Linlithgow to catch the train. Candida and I made our way back north to Pitlochry, arriving just in time to get some takeout for dinner. Smug in the knowledge that we walked almost 6 miles today, I enjoyed every bite of my baked potato!

On tap for tomorrow is the Newtonmore Highland Folk Museum, Ruthven Barracks, and Inverness to meet up once again with the Inverness Outlanders.

Leave a Reply to Chelsi the Wanderer Cancel reply